Loading ...
There must have been a time in your life when you would have got confused between a coyote and a wolf as they both resemble the same in many factors. They both belong to the same family, Canine and often lead a similar lifestyle and hence are often treated as same. But there are a number of differences between the two on the basis of certain factors. Let us understand the Coyote and Gray Wolf family one by one and then you will be in a position to distinguish between the two. 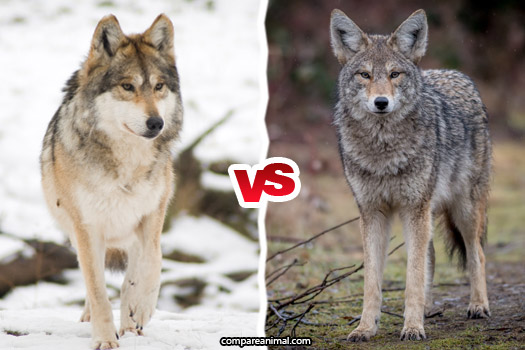 Coyote or Canis Latrans are mostly found in America and can easily adapt to any weather conditions. They can be often seen in the grasslands, forests and deserts of Northern America. They belong to the family of dog and resemble the structure as well.

Wolf also belongs to the same family, Canine, as Coyote does. In the canine family, their population is highest except for some dog species. They eat meat and are dangerous animals. Though they are an intelligent animal, from past few years, they have earned a bad reputation for their extreme wild work in which they also killed humans.

The duel between Coyote vs. Gray Wolf

It is very evident from the above facts that gray wolves are far more dangerous than coyotes. The size of the wolves and their aggressive nature while hunting makes them a dangerous animal, whereas coyotes are wild animals.

Coyotes are omnivorous whereas Gray Wolves are carnivorous and this fact proves that when the situation arises wolves can tear apart any organism in their way. Coyotes also feed themselves by eating vegetations hence are less dangerous when compared to wolves.

If a coyote and a wolf ever meet then there are high chances that a wolf will win due to its aggressive nature and its size. The wolf has an extra advantage over coyote due to its size and dimensions. Coyotes are lighter and smaller than Wolf. It is better for humans to maintain a distance from both as you never know what is going on their mind.

Videos of Coyote and Gray Wolf