Loading ...
When it comes to venom severity, the Deathstalker and Black Widow come up as some of the most venomous species in Kingdom Animalia. The venom in this two creatures is a subject of many scientific studies as it contains poisonous substances that sometime result in fatalities. A sting from the scorpion or a bite from the spider is not necessarily fatal but it has a number of effects on humans and other animals.

There are between 1700 and 2000 species of scorpions but the deathstalker is considered as one of the most dangerous ones. The venom in deathstalker is a combination of various neurotoxins (known to impair the nervous system) and cardio-toxins (result in cardiovascular conditions). Deathstalker venom contains dangerous chemicals including Scyllatoxin, charybdotoxin, Agitoxins and Chlorotoxin. All these chemicals are hazardous and in large doses, they result in death. In most cases, a sting from this scorpion is not fatal because they have low doses of the venom that gets neutralized before causing significant harm or death.

The severity of a sting from the deathstalker depends on a number of factors. This include the age and health of the person stung. For most healthy adults, a sting from deathstalker is normally not fatal. However, it may result in death if the person is allergic to some agents or if the person has conditions such as heart problems. There are also high instances of death for children and elderly people stung by this creature.

The black widow is also one of the most feared arachnids. Just like the deathstalker, a black widow bite is not fatal in most cases. However, it is lethal for people with certain medical conditions. Recent scientific studies have shown that contrary to popular belief, the black widows do not always eat their mating partners. They rarely do so and only eat their male partners under constrained conditions. 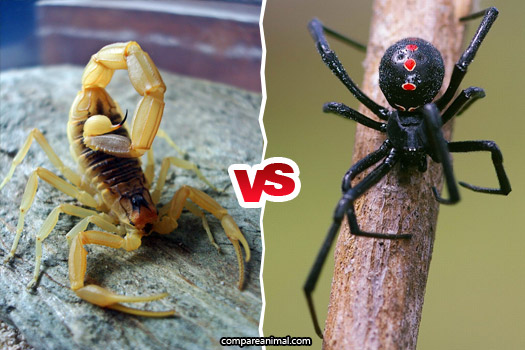 Both the deathstalker scorpion and southern black widow spider belong to class Arachnida but they have totally different physical and behavioral characteristics. It would be interesting to watch a fight between the Southern Black Widow and deathstalker.  One of the two will definitely win and the outcome will be determined by not only their venom but also their physical characteristics, agility, stamina, speed and skills.

A battle between these two species will be an epic one as the losing one may end up being fed on by the winner. Survival instincts will play a significant role in this fight as each one of them tries to hold on to life. It may be difficult to predict the winner but based on a survey in compareanimal.com most people believe the deathstalker will emerge as the winner.

Comparisons of the other venomous creatures.