Loading ...
The King Kong movie may have created a bad impression about Gorillas but that is absolutely exaggerated. Gorillas are friendly animals and can easily interact with people and other animals without any altercation. Unlike their chimpanzee relatives, gorillas rarely attack even when feeling threatened or uncomfortable.

Grizzly bears on the other hand are aggressive creatures that can snap and kill any living being in their vicinity. When aggrieved, bears sometime kill one of their own in the fit of rage. It would be a good idea to avoid any contact with grizzly bears as the encounter may turn out to be a death trap.

When confronted by this deadly creatures, climbing a tree might not be the best idea. Though rare, bears sometimes climb trees. It would be best to lay down still and use palms to cover the neck. This way the bear won’t feel threatened or aggrieved and will therefore simply walk away. 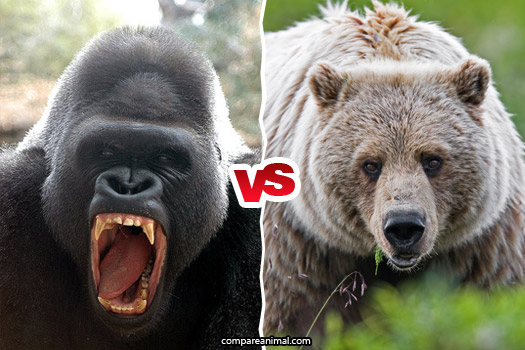 Facts and information about Grizzly Bears

Facts and information about Western Gorilla

The duel between Grizzly Bear vs Gorilla

Western Gorillas and Grizzly bears live in totally different geographical and climatic conditions. That however doesn’t mean that they cannot engage in a vigorous fight. If they were ever brought to the same battle field, they will put up a strong fight that may be fatal to one of them.

The Grizzly bear is a strong animal that is known to kill even humans. It has strong canine teeth that tear their prey’s flesh.

Western gorillas on the other hand are very flexible, fast and can climb up a tree within seconds. This means a gorilla can strategically place itself in a position that gives it an advantage during the fight. The western gorilla will be able to rely on its speed and flexibility to strike and hit the bear from any direction.

The bear on the other hand is so strong that it can easily crash the gorilla if it captures it. A war between the two will be a fierce one that includes ‘cat and mouse’ chases. Western Gorillas are also more intelligent than Grizzly bears. This means they can easily monitor the bears and know when, how and where to strike.

It is hard to predict the outcome of a duel between these two animals. Each one of them has equal chances of winning the match. The loser will most likely come out dead.

Videos of Grizzly Bear and Gorilla