Loading ...
A fight between the African bush elephant and the white rhinoceros won’t be an easy one. These two amazing creatures are famous for being the largest and second largest land mammals currently in existence.

Their enormous size is a clear indicator that a fight will result in extreme injuries or even death for the loser. There is no record of the two ever being in a fight. When experiencing musth, bush elephants are known to attack even when unprovoked.  The white rhinoceros on the other hand are docile animals that rarely fight except when provoked or when fighting to defend their territories. 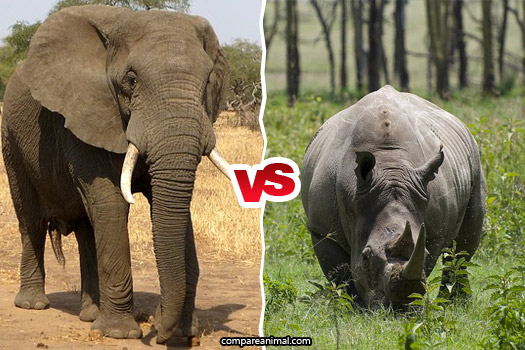 The duel between the African Bush Elephant and White Rhinoceros

The African bush elephant is likely to win a fight between the two. Savannah elephants are almost three times bigger than white rhinos and have bigger and stronger tusks. Their massive size will definitely work to their advantage. When foraging, African elephants occasionally knock down big trees and easily uproot giant trees.

A battle between the elephant and rhino will not only be influenced by their size but also stamina, intelligence and ability to dodge the attacker. The African elephant has a competitive advantage when all these factors are considered. It is more intelligent, stronger and can easily crash the rhino. One advantage that the rhino has is its ability to maneuver and dodge attackers. The white rhino may also use its high speeds to try and knock down the African bush elephant.

All in all, a battle between these two African mammals won’t be an easy one. Even the winner will most likely sustain life-threatening injuries.