Loading ...
The King cobra and Green Anaconda are two of the fiercest reptiles in existence. Whereas these two reptiles are majorly found in totally different parts of the world, a fight between them is something that can’t be easily predicted. The king cobra is known for its deadly poison that can kill huge animals within a few hours. The green anaconda on the other hand is an enormous animal with tough muscles that can crash an animal into death within a few minutes.

The king cobra uses its venom during hunting and for defensive purposes. The green anaconda on the other hand uses its physical strength to hunt and defend itself. This means that it is difficult to predict how a fight between these two animals is likely to go. 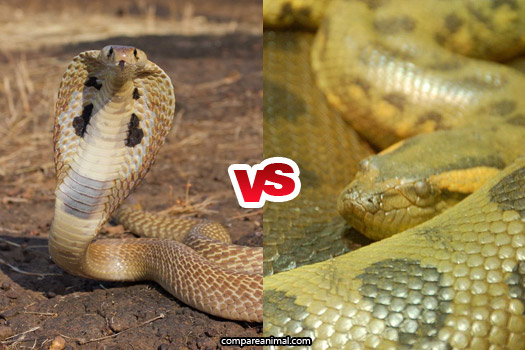 The duel between King Cobra vs Green Anaconda

Though the two animals have never been brought together for a fight, each one of them is a tough fighter with unique defensive mechanisms. They are adapted to different geographical and climatic conditions. This means that the location of the fight may determine the outcome of the fight.

The massive size of the anaconda makes it a potential winner. It will coil itself around the king cobra before squeezing it to death. Even if the cobra is relatively big compared to other reptiles, an anaconda has strengthened muscles with a grip that will strangle the cobra to death.

The king cobra is the kind of animal that will not give up that easily. Even if the anaconda is huge and strong, a cobra will put up a fight that may last for several hours. Cobras also have a deadly venom that will work to its advantage. If it manages to bite the anaconda, it will kill the anaconda within a few minutes or hours. As much as the anaconda is a massive animal it is not immune to the venom coming out of a king cobra.

It is also possible that both of them will die during the battle. The king cobra will die of strangulation will the anaconda will die of the venom from the cobra.