Loading ...
Jaguar Vs Lioness is the ultimate fight in animal world, although both never had been seen together in the wild because of distant habitat and region but still here is the article on “Compare Jaguar Vs Lioness” fight for all animal lovers who wants to know who is the better fighter and hunter.

Why I am comparing Jaguar with Lioness instead of African Male lion?

Everyone knows there is no match for Jaguar in pound for pound fight, he can take down any predator in pound for pound fight whether it is lion or tiger he can beat or even kill any of these animals in a few minutes. That’s why I have chosen the Lioness who is slightly larger and heavier than American Jaguar so that we can judge the power and strength of world’s most dangerous fiercer cat (Jaguar).

Jaguar is the world third largest cat after tiger in the first and lion in the second which can weigh up to 100 kg with the body length of 5 ft 6 inch including head. It is built physically strong with muscular body like tiger and has a strong bite force which helps him to kill its opponent with just one single bite. 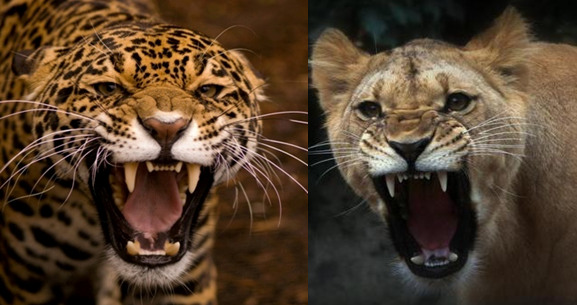 Lioness or lion is the world second largest cat after tiger which can weigh up to 120 kg with the average head & body length of 5 ft 8 inch. Lioness is the much better hunter than male lion and it is the lioness who hunts the prey in the group called pride for lions.

Lioness are found in Sub Saharan Africa and in Indian sub continental, Indian lions are smaller than African lions but here we are talking about African lioness only and on the other side Jaguars are found in Central and Southern America where he hunts alone unlike lioness who hunts in pride.

Jaguar is the solitary hunter and the apex predator in central and southern American jungles where he is on the top of food chain and survives mainly on caiman, deer, ungulates, tapirs, capybaras and even dangerous large anacondas whereas lioness mainly feeds on antelopes, wildebeest, zebra and buffaloes.

Now take glance at jaguar and lion strength, force and physical description at below given table on compare jaguar vs lioness.

After seeing the above facts and information there is no doubt that Jaguar is the stronger candidate than African lioness but still we have to consider all facts that lioness is larger and heavier than Jaguar.

Let’s consider all facts and strength of both Jaguar and Lioness:

In head to head fight jaguar is the favorite and far better hunter or fighter than lioness considering all facts and will kill the lioness comfortably.

136 thoughts on “Compare Jaguar vs Lioness”