Loading ...
Compare Bengal Tiger Vs Jaguar, Tiger is the largest living felid ever exist on the planet and in tiger sub species Siberian and Bengal tiger are the largest one rest 6 species are smaller than these two, Bengal tiger can weigh up to 200 kg with the head & body length of nearly 6 ft. It is the national animal of both India and Bangladesh.

Jaguar is the South American only living felid of genus Panthera and it is the world 3rdlargest cat after Tiger at first and Lion at second. Jaguars can weigh up to 100 kg with the total head & body length of near about 5 ft 2 inch to 5 ft 9 inch. It is the largest cat in North and South America.

Bengal Tiger are the most numerous tiger sub species in the world especially found in India, Nepal, Bhutan and Bangladesh but still they are in the list of “endangered animal” as declared by IUCN. They love to live in lush green forest where they can ambush and hunt its prey, they are very good swimmers unlike other big cats excluding jaguar who is also very good swimmer. 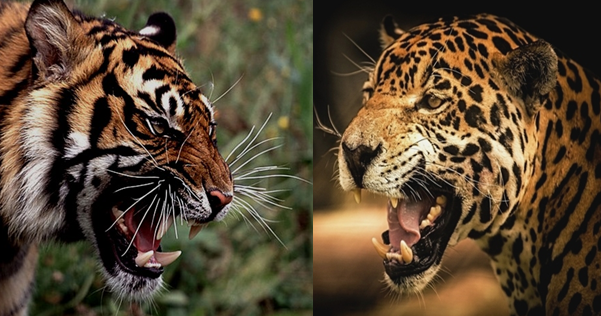 Jaguars are found in central and South America especially in Mexico, Brazil and Peru. Like tigers, Jaguars are also the solitary hunters who love to hunt and live alone in the jungle of Amazon.

Now let’s compare tiger and jaguar physical measurement, diet and habitat in given below table on compare Bengal tiger vs Jaguar.

Both Tiger and Jaguar are the world most dangerous and fiercer wild cats including lion, cheetah, cougar and Leopard. Both can kill his prey with one single bite but due to over heavy size and weight Bengal tiger always has the upper hand over jaguar.

If there is a head to head fight between Bengal Tiger and jaguar then there is the 100% chance of Bengal Tiger winning but unlike others, jaguar can escape from tiger because it can climb the tree and also swim in water.