Loading ...
After posting some unique comparisons, today, we are going to compare Nile Crocodile vs Salt water crocodile. The complete comparison and between Nile and Australian crocodile are given below.

Saltwater crocodile is known as Indo-Pacific crocodile, it is world largest living reptile which come under terrestrial as well as reptile category. The average size of the saltwater crocodile is 6.7 m and weight around 2000 Kg and females are smaller from males. As the name suggests, The saltwater crocodiles live in salt water, deltas, swamps, mangrove, lagoons, rivers and estuaries. They found in eastern coast of India to south east Asia, Australia, Africa and Japan.

Saltwater crocodile is like a king of water body where he lives; his diet includes fish, reptiles, birds, mammals, crustaceans and other species. They are very dangerous for humans because of their larger size. It has wide snout, less armour plates and longer muzzle.

Saltwater Crocodiles are also known to kill Water Buffalo. Strength and tantic wise- The saltwater crocodile waits for prey to come close to water edge and then strike hard at prey without giving any warning and with his strength drag the animal into the water. 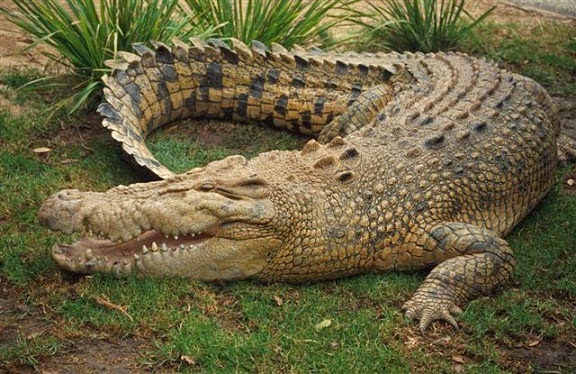 It has strong jaw pressure that drag a fully grown water buffalo into a river. It has power to pull water buffalo of 2200 pounds. In order to handle, 16 foot salt crocodile, an average of 10 strong men are required. They can even eat larger sharks; you can see shark remains in their stomachs. It has bite force of 3900 pounds per square inch.

It is known for its death roll, it grabs its prey and roll it powerful until prey died. It makes its prey off balance and making easier to drag the prey to water. It uses death roll to tear apart animal’s body after their dead. It swims with same speed as of dolphin. Salty crocodiles have speed of 15-18 miles per hours in bursts and 2-3 miles in cruising.

Nile crocodile on other hand found in African region and comes under second largest reptile in the world. It covers widespread area of sub-saharan Africa and found in rivers, lakes and marshlands. Even though, they are capable to live in salty water but rarely found in salt water. It is known as the king of Nile delta. The average size of the Nile crocodile is 6.1 metre and weight around 910 Kg. 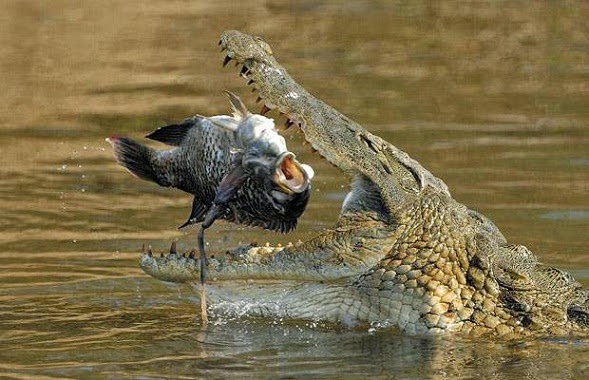 They are ambush predator and wait for prey to come to them. When situation are ideal for them then they attack on the prey without any warning. They have strong conical teeth that produces very powerful bite that sink the flesh and making it difficult for the prey to get out of it. They can apply high force for extended period of time.

The underwater ability combined with their speeds and make them very dangerous hunter for larger animals as well. Once the prey is dead, they rip it off using a technique known as death roll.

Nile crocodile comes under one of the dangerous species of crocodile and responsible for hundreds of human deaths. Many people consider it as endangered species but it is common species and not an endangered one. They have dark bronze color on above side and black spots at back.

The comparison and difference between Nile crocodile vs Australian Salt water crocodile are given below.

Nile crocodile in same length is slighty heavier than the Salt water crocodile. 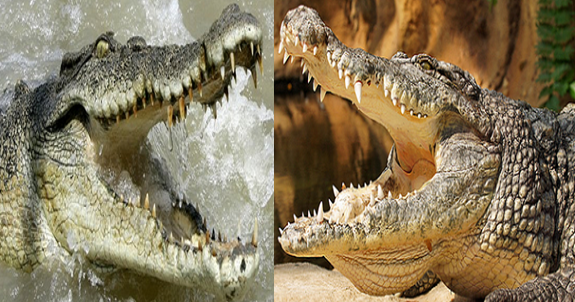 Nile crocodile is heavier and has stronger bite force but when it is compare with salty crocodile then they both have similar jaw structure.

Crocodiles try to rip off and kill each other. I have watched some documentaries in which Nile crocodile gets tired faster while saltwater crocodiles do death roll and any possible to get out of it. Saltwater are more aggressive, more ego and usually more faster then Nile crocodiles.