Honey badger is ratal mammal found in Africa, India and mainly in Southeast Asia. It is carnivorous species having thick skin which act as defensive weapon for Honey badger.

There are 12 sub species of Honey badgers and all of them is of different size and have different color on the back side. It has a long body with very broad from back. The skin allows honey badger to turn and twist easily. It is noted that Honey badger skin around neck is of 6 millimeter. 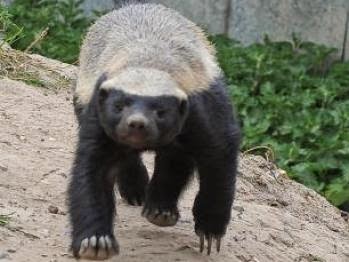 They have small eyes, head is flat and main thing is that- Honey badgers are fearless species and very aggressive and can start fighting with predators without knowing about their size. They can even start fight with Lions. So, have a look at Honey badger vs Lion comparison.

Honey badgers claws and teeth are very strong that they can hunt the tortoise along with their shells. Now come to size, Length is of 55-77 cm and tail adds another 12-30 cm, height is of 23-28 cm and weight around 9-16  kg. The large mustelids act as great strength for Honey badgers.

Finally, I am coming to Honey badgers diet, they like to eat rodents, birds, lizards, eggs, snakes, insects, turtles, frogs, tortoise, honey bee, beehives, roots, berries and bulbs. The best way to attack Honey badger is blow hard on his skull and if possible grip it from his neck otherwise you cannot catch this fearless creature.

Komodo dragon is known with name of Komodo monitor. It is largest species of lizard found in Indonesia with max of 3 meter in length and weight around 70 kilograms.

They rule and dominate the islands and areas in which they live. They hunt on birds, invertebrates and mammals. They are known for their venomous bite which secretes various toxic proteins. They hunt in exceptional way in comparison to other reptiles. Komodo diet includes deer, reptiles, birds, mammals, bird eggs, monkeys, goats, horses and water buffaloes and sometimes humans as well. The estimated life span of komodo dragon is 30 years. 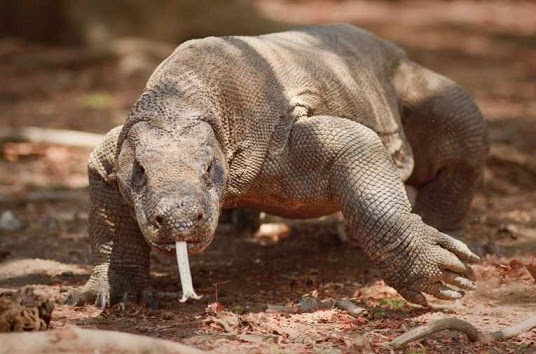 Komodo dragon is blood tinged because of its teeth which are completely covered with gingival tissue and it naturally lacerated while feeding. It is ideal place for bacteria to live in its mouth. Komodo dragon has long forked tongue with scales skin which contains small bones( osteoderms) which works as natural chain-mail. The see vision of dragon is 300 m but very poor vision at night time.

They can differentiate in colors but cannot see stationary objects visually. It uses tongue to detect smell and taste. They prefer to stay in hot and dry places like savanna, trophical forests, and open grassland and digs holes of 1-3 meters. They have speed of 20 km/h and even climb on trees (when they are young) using strong claws. They can even stand on its legs using tail support. 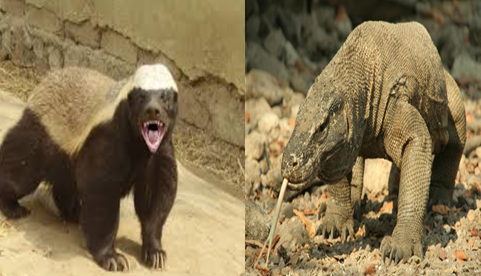 Now, it is high time to know comparison table and difference between them.

High resistance on honey badger immune system and very strong claws( through which honey badger can eat tortoise shell). So, I think Honey badger would be winner. I have also seen a video in honey badger easily killing a monitor lizard and other reptiles. So, it is not a hard task for honey badger to kill Komodo dragon.