Some people want to know comparison between White shark vs Bull shark or white shark vs tiger Sharks. So, in upcoming posts, I will compare them. Sharks are exceptional species as unprovoked attacks are associated with these animals. The brief analytics has shown us that it is human beings who make mistakes during any encounter with sharks.

Tiger shark comes under requiem shark species. It is also known as sea tiger because of its length of attaining of 5 meters. It is commonly found in tropical in central pacific islands. In western Pacific Ocean, it is found far north from japan and far south from New Zealand.

Sometimes, also found in Gulf of Mexico, South America and North America, India, Hong Kong, India, Indonesia and Australia. It has dark stripes on its body which looks like tiger pattern and thus it is known as tiger shark. With the passage of time, tiger type patterns on shark fades.

It has wider food spectrum among all sharks which includes seals, fishes, birds, turtles, dolphins, squid, small shakes and sea snakes. It is also refer as garbage eater. Tiger shark is largest member of order Carcharhiniformes with 270+ species. The recent size recorded for tiger shark is 350 m. The sharks can attain length of 10-15 Feet and weighs around 485-635 Kg. 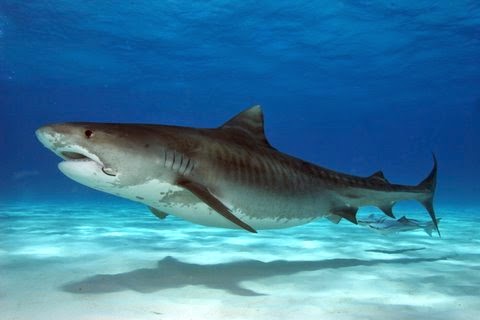 The skin color of tiger shark range from blue to green and they are quite sensible to dark spots and stripes. They can easily detect vibrations in water even hunt in darkness.

Tiger sharks are least described species of shark family. They found in large numbers in comparison to white sharks. Tiger sharks have most perfect teeth structure among all sharks. As far as the size of the Tiger sharks are concerned then they are most successful to kill almost every species.

They are not much choosy about their diet. They can adjust the food supply such that when food supply is low, they change their diet as well. Tiger sharks prefer to live in warm water and more often seen in contact of humans. Due to uncommon diet, it becomes competitors of humans.

It is also known as one of the dangerous sharks among all water species. They are known for their speed; it is fast and has strong teeth which are less in comparison to tiger sharks but not less for humans. They spend majority of time in shallow water close to shore and most often found in rivers which carry fresh water and when they come in contact with salt, they dies.

It can even sustain in brackish water with adaptations which can produce stress in bull shark body. The mixture of salt and fresh water produces limited visibility and also causes electric fields overdose. This is big harm for humans as of unrealistic environmental conditions. 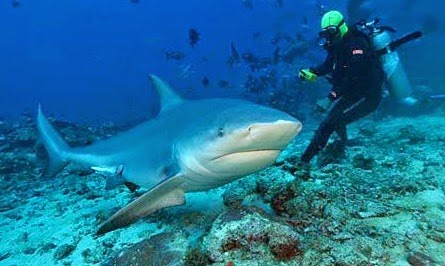 Bull shark is known as Zambezi shark and often found in Africa and Nicaragua in warm, shallow water across rivers and fresh water. It is of aggressive nature. The shore attacks which take place near banks, it is bull shark which causes most of the attacks. Bull sharks are large sharks with size of 8 feet and maximum of 11 feet and weight of 315 Kg. Bull sharks are heavier and wider than requiem sharks. It has bite force of 600 Kgs.

Bull shark is best among 43 species of elmobranch and they hunt in pairs and their diet includes bony fish, birds, turtles, dolphins, sharks, terrestrial mammals and stingrays. They found in swallow waters. So, pose dangerous threat for humans.

I hope above tutorial on Tiger shark vs bulk shark would help you.