Loading ...
The Jaguar and alligator are two of the bloodiest creatures in kingdom Animalia. A fight between the two creatures will definitely be a vicious one and will leave one or both of them dead. If the two animals were ever to fight, it would be almost impossible to predict the outcome of the combat.

Both have strengths, weaknesses and unique characteristics that will play a major role in determining the outcome of the battle. The outcome will not only be determined by their physical characteristics but also their behavioral characteristics and intelligence levels. The alligator is a timid animal that tends to avoid any form of altercation unless provoked. Jaguars on the other hand are vile animals that may attack and kill any animal without even being provoked. 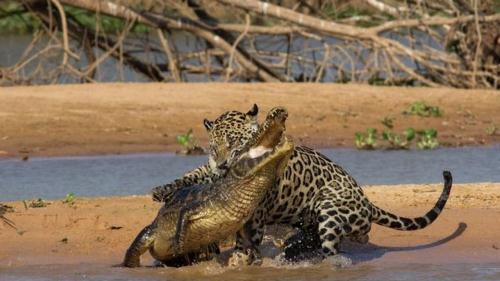 Here are facts and information about these two creatures:

The duel between Jaguar vs Alligator

Animal enthusiasts can’t help but imagine how tough a battle between these two creatures will end. Whereas the alligator dwells majorly in water, jaguars normally live in the jungle surrounded by huge trees. Jaguars live in rainforests near water bodies and therefore it is highly likely that these two animals can find themselves in the same battlefield. The two animals are well adapted to their surroundings and are camouflaged to avoid detection by predators.

In the fight between these two creatures, the alligator will rely on its muscular jaw that is not just flexible but also very resilient. When provoked, alligators are agile animals that react and attack within seconds. They also have an unbreakable jaw grip that can crash even the strongest of animals.

On the other hand, jaguars are stealth animals that know how to hide and attack when least expected. They can stay at a vantage position for a very long time while waiting for the prey to reach striking distance. They can spring at high speeds and jump on to their prey without giving the prey time to escape.

It would be almost impossible for an alligator to waylay and catch a jaguar. However, a jaguar can still be hunted especially when drinking water from fresh water bodies. Alligators normally lay in waiting near fresh water bodies and may attack and kill a jaguar instantly.

Jaguars are strong animals that can lift and drag objects that are more than their own weight. They are also perfect climbers that can reach the top of a tree within a few seconds. If the fight was to take place deep inside a forest, a jaguar will most likely climb to the top of a tree. It will then jump down on to the alligator and if it manages to bite the alligator’s neck or head, then it will promptly kill the alligator.

On the contrary, if the fight takes place in a marshy area, the alligator may clamp the jaguar before crushing its bones and rendering it immobile. Once the jaguar is immobile, the alligator will easily kill it using its powerful jaws before making a meal out of it. An alligator can also kill a jaguar by catching it and dragging it below the water surface. This way the jaguar will drown within a few minutes.

Videos of Jaguar and Alligator